#19: Animals and society in the nineteenth century Britain

Historian Dr Hilda Kean, former Dean of Ruskin College, Oxford, takes us back to nineteenth century Britain, as she discusses the landscape for animals around the enactment of Martin’s Act 1822 (named after its sponsor, Richard Martin MP), the first national legislation intended specifically to make animal cruelty an offence. This episode contains references to animal cruelty, including cat skinning, that some people may find distressing.

Let’s talk about animals! A new way to discover more…

about the important animal law and policy topics of the day from leading experts.

Episode #19: Animals and society in the nineteenth century Britain

In this week’s podcast, Paula Sparks chats to Hilda Kean (a British historian who specialises in the cultural history of animals) to discuss a brief history of human and animal relationships in the light of the bicentenary anniversary of the Martin’s Act. Dr Hilda Kean discusses early legislation, the SPCA, the changing relationship between animals and humans, enforcement and how it compares with attitudes towards animal welfare today.

This episode contains references to animal cruelty, including cat skinning, that some people may find distressing.

Episode #18: How the law can help save Asian elephants

In this week’s episode we talk to Duncan McNair, CEO of Save the Asian Elephants (‘STAE’) about elephants, and the impact that unethical elephant tourist attractions have on the welfare of the individual elephant and on the elephant population. Duncan discusses proposals for law reform that would see a ban on the marketing of certain tourist attractions in Asia involving elephants.

Episode #17: The elephant in the court

Dr Joe Wills talks about a case brought by the Nonhuman Rights Project (NhRP) on behalf of an elephant named Happy. The NhRP is seeking a writ of habeas corpus to secure Happy’s freedom, so that she can be transferred to an elephant sanctuary.  The case has recently been heard by New York’s highest court and raises fundamental issues about legal personhood.

Dr Angus Nurse is the author of a Government commissioned report: ‘Investigation of measures to reduce dog attacks and promote responsible ownership amongst dog owners with dog control issues in the UK.’ 2021. Dr Nurse discusses the report and its implications for dog control policy, law and enforcement.

David Thomas, lawyer at Advocates for Animals and Kerry Postlewhite of Cruelty Free International, discuss the use of animals for cosmetics testing. We learn about the legal landscape and current challenges.

David Blatte, author of ‘The Vegan Imperative, Why We Must Give Up Meat and Why We Don’t’ talks about the book, compassion and his career as an animal law attorney. Read a sample on Amazon here.

Episode #13: A legal victory for beavers in Scotland

We hear from lawyers and the petitioner involved in a public law challenge in 2021 against the Scottish Government’s beaver killing policy. Learn about the legal issues involved and the implications of the decision for Scotland’s beaver population and beyond.

Episode #12: Sir David Amess and his legacy for animals

We speak to David Bowles, RSPCA Head of Public Affairs, about some of the causes supported by the late Sir David Amess who was MP for Southend West and a consistent champion of animal welfare throughout his long career. Sir David Amess MP was tragically killed in 2021, but his legacy lives on. Join us in remembering a great advocate against animal suffering who worked for decades in Parliament to enshrine animal welfare standards in law.

Episode #11: Can lobsters, octopus and like species experience sensations such as pain?

An independent review of sentience commissioned by the UK Government and conducted by the London School of Economics and Political Science (LSE) has concluded there is ‘strong scientific evidence decapod crustaceans (crabs, lobsters, prawns, & crayfish) and cephalopod molluscs ( such as such as octopuses, squid and cuttlefish) are sentient.’ We discuss the report and it’s findings with Claire Howard, Director of Crustacean Compassion, an award-winning animal welfare organisation dedicated to the humane treatment of decapod crustaceans.

Rob Espin, solicitor and co-chair of A-Law’s Wildlife Law Working Group, discusses problems around the use of rodent glue traps and outlines proposed new laws designed to restrict their use.

Episode #9: A legal perspective on puppy farming and dog theft in Ireland

Episode #8: Proposed restrictions on the import of dogs into Great Britain

With a consultation into the Commercial and Non-Commercial Movement of Pets into Great Britain due to close on 16 Oct 2021, we ask three campaigners (Marc Abraham, Sarah Dixon and Jordan Shelley) at the forefront of the fight against ‘puppy farms’ and ear cropping, respectively, for their views on import restrictions for dogs with cropped ears or docked tails or under 6 months of age. We ask specifically, should the government exempt animal rescue and re-homing organisations from these restrictions?

Episode #7: Should pet abduction be a specific offence?

In this episode, we discuss the case for a specific crime of pet abduction. Should the criminal justice system treat the theft of companion animals in the same way as the theft of inanimate property or does the law need reform? We talk to John Cooper QC, who has been advising the pet theft campaign.

Warning: some listeners may find content distressing Dr Joe Wills from Leicester Law School, discusses the decision in Centraal Israëlitisch Consistorie van België and Others. In this case, the Court of Justice of the European Union ruled that Member States could require pre-stunning of animals before slaughter, without infringing fundamental human rights. There has to be a balance between promoting animal welfare and respecting the rights of those in religious communities to practice their beliefs.

Warning: adult themes, not suitable for children. ‘Where animals are abused, people are at risk and where people are abused, animals are at risk.’ That is the central message of this episode, in which we consider what can be learnt about domestic abuse and coercive control when we take the time to consider the animal within the home. What does this tell us and how can we protect vulnerable family members?

Episode #4: Nowzad, ‘Praying for a miracle’

In this special edition, Peter Egan, actor, animal advocate and ambassador for the charity Nowzad, talks about the organisation behind the headlines, including the brave team who at the time of broadcast are facing danger from Taliban forces in Afghanistan. Our thoughts are also with other animal rescues in the region, including Kabul Small Animal Rescue and with all people at heightened risk in this region. The title is taken from Nowzad’s leader, Pen Farthing who in one of his early tweets, asked people to pray for a miracle.

Episode #3: Legal challenges to Government decisions on badger culling and the Ivory Act

Our legal experts discuss two legal cases that made the headlines in 2020. Friends of Antique Cultural Treasures Ltd v DEFRA [2020] EWCA Civ 649, concerning a challenge to the legality of the Ivory Act 2018, and R (National Farmers Union & Anor) v Secretary of State for Environment, Food and Rural Affairs [2020] EWHC 1192 (Admin) challenging a decision not to grant licences to kill badgers in furtherance of its policy for control of bovine TB. Barristers Frances Allen and Alan Bates explain what judicial review is, how it was used in each of these respective cases, and what lesson can be learnt from these legal challenges.

Episode #2: Reflecting on a career in animal law with Peter Stevenson

Peter is a qualified lawyer who has worked for nearly three decades in animal welfare. During this time, he played a leading role in winning the EU bans on veal crates, battery cages and sow stalls as well as a new status for animals in EU law as sentient beings. In October 2020, Peter was awarded an OBE in the Queen’s Birthday Honours list, in recognition of his tremendous contributions in the field of animal welfare. Paula talks to Peter talks about his career, the highs and lows, successes and obstacles and what he sees as the challenges ahead.

This episode introduces you to our brand new podcast, Talking Animal Law. In this episode we tell you who we are and explain why we are launching this legal podcast focusing exclusively on animals. 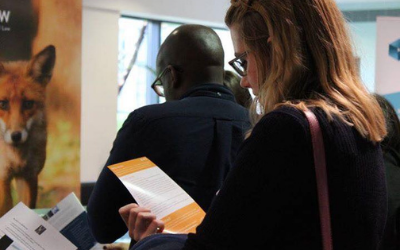 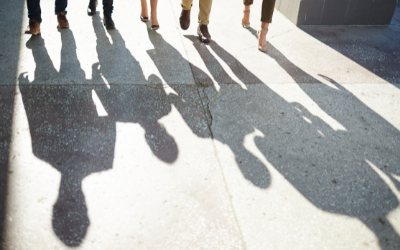 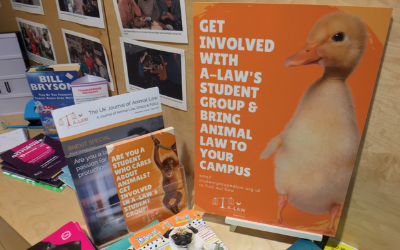 Act for animals at your uni

Find out how to become a Student Member and get active for animals at your university!