An interview with Advocates for Animals 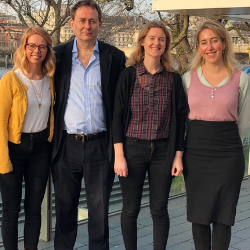 Advocates for Animals is the UK’s first law firm dedicated to animal protection law. It was founded in 2019 by Edie Bowles and David Thomas, who are both Solicitors at the firm. Their team is completed by Solicitor, Alice Collinson, and Operations Support Officer, Vanessa Johansson.

What prompted you to set up Advocates for Animals (AfA)?

AfA is born of a conviction that creative use of the law can really help animal protection organisations achieve their campaign aims. This is at every stage of campaigning, from finding out information (through undercover investigations and freedom of information laws), getting hard-hitting messages across in the media without being sued, drafting legislation, using the courts to get the best interpretation of laws, and helping to ensure that gains are not lost. There are very powerful vested interests against animal protection organisations, so they need to be well-equipped to fight their corner.

Compared to their counterparts in the environmental and human rights movements, animal protection NGOs have generally not used the law to further campaigns. Furthermore, prior to Advocates for Animals, animal law was predominantly a volunteer-led practice area. Volunteers are of course welcome, but it is only by professionalising animal law that we can give the animals the protection they deserve.

Lawyers cannot work in isolation, of course. Any successful campaign needs a range of skills, including science (to show how animals suffer), the development of ethical arguments, the use of media (both traditional and social), lobbying, and so forth. Ultimately, however, only a properly-drafted, rigorously-enforced law can protect animals from cruelty and shape enlightened societal attitudes.

David and Edie decided to take a leap of faith to get AfA off the ground when working together at Cruelty Free International in 2017, and officially launched the firm in 2019.

What do you hope AfA will achieve for animals in the UK?

Along with professionalising animal protection law and showing that it is a serious area of law, we hope to achieve a great deal for animals in the UK. We are already doing so.

It is not unusual for people to cite the UK as a utopia for animal welfare. Whilst it is true that we have more animal laws than many countries, protection is piecemeal and inadequate. The philosophy underpinning animal legislation is that animals should be protected from cruelty only to the extent that that does not interfere with some human interest (such as cheap meat, medicines, product safety, recreation, clothes and the desire to own exotic pets). And, of course, it is human beings who decide when the interests of animals should be overridden.

In addition, like in other countries there, is a huge problem with enforcement of the laws which do exist. As a law firm dedicated to ensuring that those who break the law, and those who have a duty to regulate and enforce the law, are held to account, we aim to help change this. After all, a law is not worth the paper it is written on if it is not enforced. By securing enforcement of the law and favourable interpretation by the courts, we hope to improve the treatment of animals and the lives they lead.

Was it challenging to establish a practice specialising in this niche area?

Absolutely. Running a law firm is an ever more complicated business. Before we could launch, we needed to ensure that the business model was sustainable. This was done by highlighting the value of our service and making us accessible to clients.

However, once that was achieved we really have had a positive start. It is not only animal law that is becoming professionalised; the movement in general is. This has led to a greater understanding of why using sophisticated tools like the law is so important. There is awareness that our opponents are very well-armed, and we need to match that. The law can be incredibly complicated.

What kinds of cases have you been instructed in so far?

We have to be mindful of client confidentiality but, since launching, we have been instructed on a wide range of issues. Everything from undercover investigations, using freedom of information laws, advice on libel and copyright, obtaining information, and  various forms of litigation. Most of our work goes on behind the scenes: litigation really is always a last resort.

What are your proudest achievements to date?

There are so many, including:

Much of our work is international and includes European Union law (most of which will continue to apply in the UK long into the Brexit process).

What does a typical week at AfA involve?

At the moment it mostly involves seven days, for one. Running a new business means we are all doing the job of four people. Everything from setting up systems through to communication and events.

In terms of legal work, it is really unpredictable. We are beholden to client instructions, of course. One week you could find yourself giving general advice on the Animal Welfare Act 2006, and the next you could find yourself looking specifically at the trade in donkey skins in East Africa. This makes life so interesting and it is such a privilege to be involved in so many amazing campaigns.

What, in your experience, are the most effective legal tools that can be used to help further animal interests?

Animals are used and abused in most areas of society; therefore, to protect their interests, a multi-faceted approach is needed. This can include challenging false advertising claims, protecting the interests of activists and groups who campaign, through to obtaining information from public bodies, and directly challenging an unlawful practice. All of these techniques help level the playing field for animal campaigners and animal interests in a world currently governed by human interest.

What do you feel are the biggest animal protection challenges in the UK at the moment? Are any of these particularly unique to farmed animals?

Unfortunately, there are many. To narrow it down to farming practices, the intensification of farming and attempts to secure ever higher yields (whether that be meat, eggs, or dairy) is causing unimaginable suffering. However, there does seem to be growing discomfort with these practices, so we are confident that the tide will turn. You can see this from the huge explosion in veganism.

Animal experiments are another huge area of concern, as it is the trade in wildlife, and the various recreational activities involving animals.

How did you all get into animal law?

Edie - It was definitely not a straightforward journey for me. I have always cared for animals. However, I had no idea that I would have a career focused on trying to protect them. At some point during my studies, though, I came across the idea of animal law, but again I thought it would be a voluntary pursuit on the side. I was lucky enough to be able to crossover into animal law when a job came up at Cruelty Free International.

David – I ran an RSPCA Dog’s Home as a volunteer when I was 18 and, when I qualified as a lawyer, knew I wanted to use the law to benefit animals. First, I became a civil litigation partner in a West End firm of solicitors before moving into the voluntary sector as a human rights lawyer. Gaining experience in a wide-range of law really helps. For many years, I have been a consultant to Cruelty Free International and other animal protection organisations, and a trustee of Compassion in World Farming. I have been Chair of the RSPCA and am currently Vice-Chair.

Alice - I only discovered animal law as an option (and growing field) close to the end of my training contract. After some time practising in civil litigation, and volunteering with the UK Centre for Animal Law (when time allowed), I discovered an animal law masters in the States and decided to take a chance and specialise. This provided me with the opportunity to meet many others in this field internationally, and I subsequently gained experience as a consultant in wildlife law.

Vanessa - My mission in life is to seek justice for animals and reduce suffering as much as possible. When the opportunity arose to join Advocates for Animals, I was eager to help build a landmark organisation in the animal law field.

What advice would you give to aspiring animal lawyers?

1) Trust your own journey. While your peers will be going down a very structured path of applications, vacation schemes and training contracts, your journey will not be as clear. Animal law is a new field and, as such, you really do need to blaze your own trail, which is absolutely possible.

2) It is worth considering what other area you could work in while you are waiting on an animal law job to come up. This might be a practice area that overlaps, such as public or criminal law, or a different role in an animal charity, such as policy advisor. This can pave the way to working as a lawyer. Volunteering is really important to get yourself known and show what you can do.

3) And finally, Action, Action, Action! This last point applies to anyone wishing to pursue any career; there are too many amazing people out there for you not to have to go above and beyond. This could mean attending relevant conferences, staying up to date on the law, and jumping at any work experience. But perseverance will pay dividends.

This interview was first published in the Farmed Animal Special of Animal Justice UK, which is available to read in full here.

We need your support

We rely upon membership income and donations. Please join us or donate and support our work.