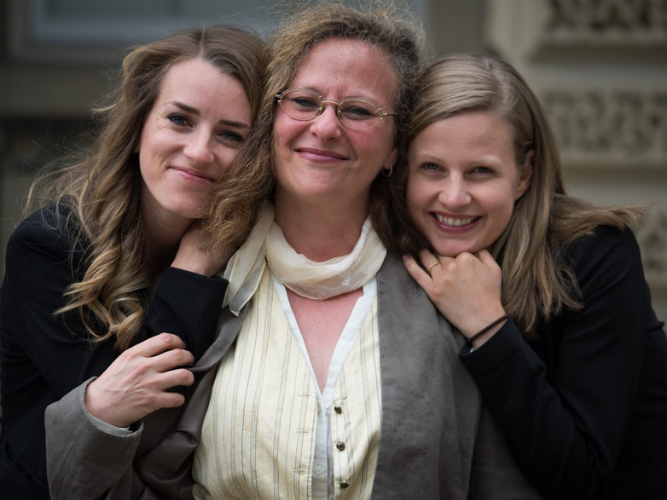 This is the final piece in a series focusing on the female lawyers featured in the multimedia documentary project Unbound, co-founded by acclaimed photojournalist Jo-Anne McArthur (We Animals, The Ghosts in Our Machine) and Dr Keri Cronin (Department of Visual Arts, Brock University). Find out more at unboundproject.org

In Canada, as elsewhere, the field of animal law is burgeoning. Here, we speak with three exceptional lawyers, all committed vegans, who use the law as a tool for animal liberation.

Lesli Bisgould is a trailblazer. She not only opened Canada’s first practice in animal rights law, she also later taught it to a new generation. She has mentored and inspired people like Camille Labchuk and Anna Pippus, who have built on her work, and made the rights of animals increasingly visible and increasingly represented. As Bisgould puts it, “animal law has gone from an idea to a fact.”

On the growth of animal law

Labchuk notes that when she first started, there were just a handful of animal law classes, and many people were dismissive of her goal of being an animal rights lawyer. She points now to the increasing number of academic publications on animal law in Canada as well as the number of high-profile cases involving animals that regularly make headlines in mainstream media. “These issues are in the news every single day,” she says. And this rising awareness of animal law is starting to find its way into Canadian law schools as well. “That is what excites me about the future,” she said, “that 20 years from now we are going to be in that situation where everyone who has gone law school will have had exposure to an animal law class.”

Law as a tool for animal liberation

Bisgould remembers how the dominant way of thinking about animals and the law used to be that the law was “a tool that lawyers used to empower advocates to fight for things.” Now, however, “lawyers themselves want to be advocates. And that itself is a change.”

Labchuk agrees. “For me, law school and being a lawyer is just a tool to accomplish animal liberation. It is not an end or a means in and of itself.”

For these three women, achieving all they can for animals feels more like a necessity, not a career choice. For them, it can be frustrating to see people who care deeply about companion animals – people who love the dogs and cats they share their lives with –  turn a blind eye when it comes to the suffering of other animals. But this cognitive disconnect can serve campaigners, too. Says Pippus “If somebody is saying, ‘I care about how animals are treated and therefore hens should be out of cages,’ we just now need to take that compassion and care and say, ‘ok, well, if that is how you feel, the only solution is animal rights and veganism.’”

On being female lawyers

They all agree that they have been fortunate to not experience overt discrimination because of their gender in their professional lives. While there could be a number of factors at play, Labchuk credits this to the fact that, in Canada, the animal rights scene is dominated by women at all levels, and especially in leadership positions. “The heads of most of the animal organizations in Canada are women, whereas in the States, it is almost all men. I don’t really have any explanations as to why that is in Canada, but, as a consequence, I’ve personally never thought about gender as a limiting factor in moving forward in this field because I’ve never seen it to be. And my role models in the field have all been women.”

Being a vegan activist before being a lawyer may also explain some of their determination. Pippus said, when you are vegan and involved in animal rights, “you are already a bit of an outside the box thinker and don’t internalize other people’s ideas. I’m too convinced that animal liberation is right to take any sort of scoffing at it seriously.”

But there have been allegations of being emotional, with the implication that this is a negative thing and a female problem. For Pippus, the idea that being emotional is something to be ashamed of is infuriating. “You are dismissing me because I’m emotional? I am emotional. I’m angry and I’m irritable about animal abuse, because who wouldn’t be?”

These three women all see mentoring as an important part of their professional lives, and all regularly talk with students who are interested in this career path. Further, all agree that there seems to be a noticeable spike in the number of young people – particularly young women – who want to go into animal law in Canada. Bisgould advises students to have an open mind and to gain a wide range of experience. “Animal rights work can be bleak,” she said, “and it can be useful to work on other sorts of cases too. If you don’t depend on animal work for your living, you don’t have to compromise and take the wrong cases just to pay the bills. And you can afford to give low fee or pro bono service to advocates who need it.”

While interest in the field of animal law has exploded in Canada in recent years, the number of job openings in this field has not kept pace with the rising interest. “The jobs in animal law are few and far between,” Labchuk said, but that doesn’t mean that people who want to get in to this field should be discouraged. “Whether you work in it full time or not, you can make a huge contribution to the field by working in a bigger firm, by working at another organization, and doing animal law when you can – whether it is pro bono files, volunteering on the board of an organization – there are a lot of ways to contribute to the field.”

On the future of animal law

Bisgould has suggested we seek another phrase to replace ‘animal law’ because she sees it as falling far short of being able to sufficiently convey the idea that the goal of the discipline is to erode animals’ property status and establish actual legal rights for them. “Animal law is so broad a term that it could apply to all sorts of conflicts involving animals, where their interests don’t necessarily matter.”

Pippus agrees that there is a distinction between merely practicing law that involves animals, and expanding the law to include animals’ interests in courts. She said “animals should be in every area of law because animals affect every area of our life.”

Today, Bisgould works in the poverty and human rights field, as well as for animals, while Pippus and Labchuk have spent much of their professional lives building Animal Justice, Canada’s only national animal law organization, where Labchuk serves as Executive Director and Pippus as Director of Farmed Animal Advocacy. For more information on Unbound Project and to be inspired by women around the world advocating for animals, visit www.UnboundProject.org