Enforcement – the conundrum at the heart of animal welfare policy? 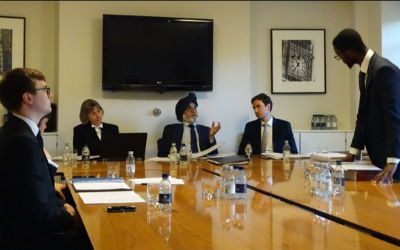 On 27 April 2015 ALAW hosted a seminar on the Wooler Review, the independent review of the RPSCA’s prosecution activity.

The seminar was co-hosted by Paula Sparks (ALAW Chairperson), Alan Bates (ALAW Trustee) and Hannah Brown (ALAW Legal Co-ordinator). There was a very good turnout with solicitors, barristers, and representatives from the veterinary and animal welfare communities (including the RSPCA and Born Free) in attendance, as well as a number of law students.

ALAW welcomed Iain O’Donnell, barrister at Crown Office Row, who frequently acts for the RSPCA on prosecutions. Iain explained that animal welfare offences on the whole are only prosecuted by the RSPCA and that the CPS has no appetite to prosecute these types of offences.

Iain’s experience is that animal welfare prosecutions are often some of the most aggressively defended cases with every point taken and decisions unfavourable to the defendant(s) almost always appealed. Trials are often very long and expensive with expert witness evidence covering very specific and detailed issues.

Within the RSPCA, Iain could identify a system of checks and balances: review of a potential case is undertaken by a centralised prosecution case manager (following referral from the regional RSPCA inspector), then the case is reviewed again by the regional instructed solicitor, and finally the instructed veterinary/scientific expert.

Iain considered the RSPCA’s response to some of the recommendations made in the Wooler Review. He felt a number of initiatives were already in place, albeit not formalised. For example in his experience there is already a distinction between the prosecution case managers (performing a function much like the CPS) and the Inspectorate. Iain shared his concerns on some of the recommendations on the gathering and presentation of veterinary evidence. For example the proposal that the RSPCA invite the Royal Veterinary College to agree a common standard or guidance on suffering could lead to issues of impartiality.

Mike Radford, Reader in Law at the University of Aberdeen, acted as “critical friend” to the Wooler Review. His key message was that the RSPCA is absolutely essential and must be defended at all costs. He noted that the Wooler Review was a response to growing organised criticism of the RSPCA. This needed to be addressed because as a charity the RSPCA’s ability to raise funds is based on its authority; if the RSPCA’s authority is undermined, enforcement of animal welfare laws is undermined. Enforcement is crucial in preventing the unnecessary suffering of animals.

From a constitutional point of view the RSPCA’s role is fundamental. Animal welfare laws have been passed by government with the intention that they are implemented and enforced. But enforcement is not just about prosecution; it also involves regulation, inspection and advice etc. The fact that this role is undertaken by a registered charity through raising funds from the public is unique (Mike explained that this was because the RSPCA inspectorate was formed prior to the police coming into being in 1822).

Mike focused on the relationship the RSPCA has with public authorities.  Although the police will assist the RSPCA in the investigation of offences, they do not initiate action. Further the police are more focused on wildlife offences, and have wildlife officers, but companion animals do not get the same resources and efforts. Local authorities were given an enforcement role under the Animal Welfare Act, but that role is discretionary. Dr Fiona Cooke (who undertook her PhD in animal welfare law enforcement at Aberdeen University) shared some of the findings she gathered during her PhD, in particular that at the time of her initial survey only 50% of local authorities who had Animal Welfare Inspectors had officers with expertise in enforcement of animal welfare laws, and resources were diminishing. A lack of personnel, budget and focus within the government agencies has resulted in few prosecutions because RSPCA powers are limited and require the support of those public bodies.

Therefore Mike strongly agreed with the recommendation in the Wooler report that the RSPCA should continue as investigator and prosecutor of animal welfare laws. However the role of the government agencies is crucial and this reinforces the need for the authorities to work together.

Further he agreed that the present position where the RSPCA Inspectorate performs a public duty on behalf of the state but with no powers was untenable. He agreed with the Wooler recommendation that RSPCA officers need to be given more enforcement powers (at the moment the RSPCA officers have no more power than members of the public).

With power comes responsibility and the need for transparency. This should entail, for example, an independent and formal complaints mechanism and more openness in the face of criticism. The Wooler Review had suggested a better response to feedback and criticism would allow the RSPCA to retain public support.

ALAW is very grateful to the speakers and those who attended and participated in the lively discussion afterwards. Keep an eye out on our website and in our newsletter for future programmes/seminars. We look forward to seeing you there!